Ten tips you should know about the “Fallas” of Valencia 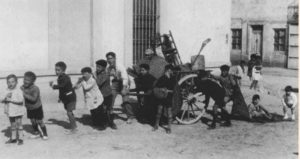 Surely at this point of your stay in Valencia, you’re already wondering what the origin of this famous party is that is about to start.

We have collected data that allows us to trace the birth of this beautiful tradition:

During the middle of the 17th century, it was a tradition that bonfires were lit on the night of March 18 to announce the feast of San José that takes place the next day. This bonfire ignition was known as ‘de falla’.

Later, the carpenters of the city made a great contribute that began to make what we know as Las Fallas in Valencia. It began to be a popular practice for carpenters to take advantage of these bonfires in San José to burn their old junk as a purification. With time, the objects that were burned began to be replaced by works of art that caricatured society, as a purification of the vices and defects of society.

And you? Are you ready to burn everything bad and start a new year with only the positive things?

2 The day of the Plantà

From march 10, you can see how las Fallas begins to be transported throughout the city, because they must be ready for the night of the 14th, in the case of the small ones. For the big ones it is for the night of the 15th. This is what is known as la planta.During the following days, a jury will visit them and asses them for the prizes that can be won. Last year, the winning ‘falla’ was the one of Convento de Jerusalén.

3 Anyone can place a ‘Falla‘

In fact, it is usual for schools and associations to make a ‘falla‘ with damp painted newspapers to introduce the kids in this beautiful tradition.Regarding professionals ‘fallas’, each neighberhood has casales falleros with their respective commissions that are responsible for getting the funds and permits that are needed to hire a Fallas artist and be able to put it on their street. 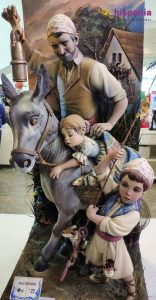 Surely you’ve heard the word ‘ninot‘ coming from the Valencian people, but do you know what it is? The figures that make up ‘las fallas’ are called ‘ninots’. Each year, the casales propose one to be pardoned, which means it will be saved from the flames. Later, they are exhibited in the Fallero de Monteolivete Museum. If you want to visit this amazing and historic museum, you should sign up for the visit that our beloved  Hispania, escuela de español makes.

From 1 to 19 March, the different mascletàs take place in the Plaza del Ayuntamiento in Valencia. In this event, the main senses are hearing and smell. This event gets its name because of the firecrackers used, the masclets, whose sound reaches 120 decibels, resembling a concert and produces an intense smell of gunpowder. To make it an incredible show, the wicks must have different sizes, you must vary the distance between them and the speed of the shot.Prepare your ears well, because you are about to experience something unique! 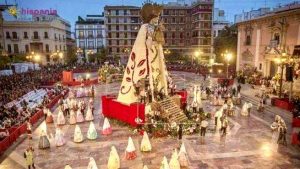 The word ‘ofrenda‘ means offering, gift and in this case the gift consists of a spectacular amount of flowers.During the days 17 and 18 of March, the main protagonist is la Virgen de los Desamparados. The falleras make a great journey to the Plaza de la Virgen to put a bouquet of flowers down that will make up a dress of a 14 meter-tall figure that represents la Virgen.

If you walk through the different tents of the city, you will see how Valencians prepare traditional paellas all together in the street.But the key players in the party are the fritters and churros dipped in hot chocolate. Do not feel worried! You will be able to find them easily because in almost every street there are places to buy them. 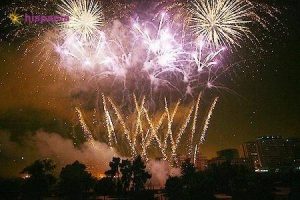 As we have said, in the mascletà, the most important thing is the smell and the sound, but if you want to enjoy a wonderful fireworks show, you will hae to wait for the night when the castles in the bed of the Turia river take place. The time of each castle varies, so you should consult the 2019 fallera programming to not miss any of the shows.

Las Fallas is a very bright party full with light and colour; not only by the fireworks and by the ninots that decorate the city, but also because the streets are dressed with great decorations of lights. I advise you to visit the Ruzafa neighbourhood as it is known to be the one with the most impressive lighting and unforgettable light shows. In addition, to end the night, in each neighbourhood you can find fun festivals in which you move your body with dancing as if there was no tomorrow.But you still have not bought your plane tickets to Valencia yet?

On the night of March 19, las fallas is finished with the burning of all the Fallas monuments. The Fallera Mayor and the President of each commission open the act by lighting a fireworks display. You should check the schedules because they are different: 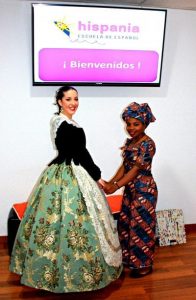 If you want to learn more things about Las Fallas, while practicing your Spanish, come and visit us!